Christine Newton’s life changed on December 5, after receiving a phone call letting her know she had just won $500,000. 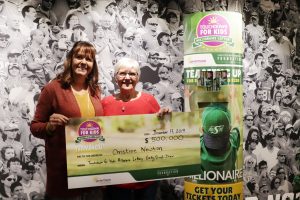 Christine and her husband Ken from Swift Current said they were totally shocked after first receiving the news they won the early bird prize in the Touchdown for Kids Millionaire Lottery.

The reality of winning half a million dollars is still sinking in for the couple, who are in the process of retiring from farming.

“It seems like it’s still a dream. We haven’t made any solid plans, but we would like to travel more,” Christine said.

Christine said word travelled fast after the draw announcement earlier this month, as she received congratulatory messages from around Canada, and as far as California and Australia.

One lucky person will still win the grand prize of $1 million. 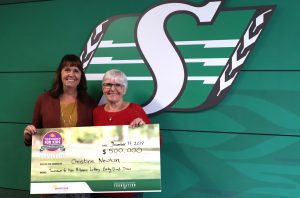 Funds raised by the Touchdown for Kids Millionaire Lottery are being shared equally between the Saskatchewan Roughrider Foundation and Jim Pattison Children’s Hospital Foundation, helping support moms-to-be and kids in Saskatchewan.

Buy your tickets today online at touchdownforkidsmillionairelottery.com or by phone in Saskatchewan at 1-844-574-5437.