It’s not your average Thursday night in hospital. A popular new game night in Saskatoon’s Acute Care Pediatrics ward has kids counting the number of sleeps until Family Bingo Night rolls around. It’s often their highlight of the week with a chance to win some impressive prizes, laugh with family, and forget about their health challenges.

“It’s a way to create excitement and something for kids to look forward to when they are feeling down about being in hospital,” says Kelsey Luedtke, Recreation Therapist of Acute Care Pediatrics. “It’s great because it’s a game that all ages love to play; we’ve had patients as young as two play along with their parents (they love using the dabber!) as well as teens, siblings and grandparents.”

A donation for the program came to Jim Pattison Children’s Hospital Foundation thanks to a community event based in Kamsack, Sask. The idea was initially proposed by a family who spent time at Alberta Children’s Hospital and took part in bingo night once a week there. A typical Thursday bingo night sees around 25-30 children and their families playing along, with multiple winners throughout the night.

“They told me about how it worked and I instantly loved the idea because of the inclusiveness,” explains Luedtke. “Children who are on isolation precautions and unable to leave their rooms can join in on the fun via walkie-talkie. They can hear other kids playing bingo and use the walkie-talkie to call in their ‘bingos’ and also respond to our knock-knock jokes or conversations going on in the playroom.” 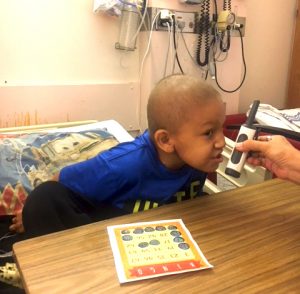 The walkie-talkie factor of Family Bingo Night is key to ensuring kids in hospital experience the healing power of play regardless of the severity of their medical challenge. The generous to fund the walkie-talkies and prizes has been particularly beneficial for kids like five-year-old Jaleel, who is receiving treatment for leukemia. Having spent time in hospital over the past several months, he has participated in over 10 bingo nights to date and is quickly racking up his winnings.

“Every time he gets admitted to hospital, he almost immediately asks when bingo night is,” says Jaleel’s mom Melissa. “He likes it when he can play with other kids in the playroom, but when he can’t go in the playroom he’s happy he isn’t left out.” 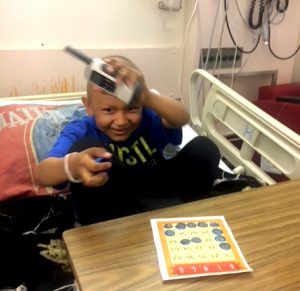 “This special once-a-week family night in pediatrics is able to simulate the same type of environment that our families otherwise would have experienced had they not been in hospital. It gives them an opportunity to socialize the way they normally would and create memories regardless of the setting they’re in,” says Lynn Redl-Huntington, Vice-President of Communications at Jim Pattison Children’s Hospital Foundation. “The power that laughter and play has on a child’s emotional, mental and physical well-being is often understated. We are so thankful those who supported bringing this activity to our province to help emphasize the importance of play for healing.”

Family Bingo Night will be a part of the Child Life Zone in Saskatchewan’s new Jim Pattison Children’s Hospital, set to open next year. The 2,800 square foot space will be a place where pediatric patients and their families can play, learn, laugh and relax. It was created in partnership with country music legend Garth Brooks and his Teammates for Kids Foundation, The Mosaic Company, and Jim Pattison Children’s Hospital Foundation.

To support this program, please donate to the Acute Care Pediatrics designated fund at pattisonchildrens.ca