Kids in Saskatchewan who spent time in hospital on Valentine’s Day showed bright smiles and big appreciation after receiving Valentine cards from people across the province.

The Share the Love campaign, created in partnership with Canadian Pacific (CP) and Jim Pattison Children’s Hospital Foundation, kicked off on February 5 as a way to encourage people in Saskatchewan to create a Valentine card online at pattisonchildrens.ca. The cards were then printed and hand-delivered to kids in hospital on Valentine’s Day.

“The kids have been looking forward to Valentine’s Day for weeks! The Valentine cards were so creative and warmed the hearts of all those that were able to participate,” says Melissa Speiser, Co-Manager of Acute Care Pediatrics. “Thank you for the inspiring messages, they brought smiles to so many.”

Six-year-old Tai recently underwent surgery in Saskatoon and unfortunately missed out on celebrating Valentine’s Day in school. Through the Share the Love campaign, he was surprised with Valentine cards with customized messages from people across the province.

“It would have been his first classroom Valentine’s day in Kindergarten so it’s hard to miss out on that,” says Tai’s mom Victoria. “He wasn’t able to give Valentine’s cards this year in school so it’s nice to be able to receive them here in the hospital and still celebrate the day.”

The Valentine cards incorporated a golf-theme in honour of the 2018 CP Women’s Open in Regina, August 20-26, with catch-phrases such as ‘You putt a smile on my face’ and ‘Wishing you a tee-rific Valentine’s Day’. Each card sent in through the website activated a $10 donation to Jim Pattison Children’s Hospital Foundation from CP through its CP Has Heart campaign.

The cards maxed-out the Share the Love Valentine campaign’s goal of a $10,000 donation from CP. In total, 1,272 cards were sent in from places as far as the Philippines, Minnesota, Toronto, and Calgary. Those who sent in a Valentine were also encouraged to make their own donation towards the campaign, which then would be matched by CP up to $5,000. 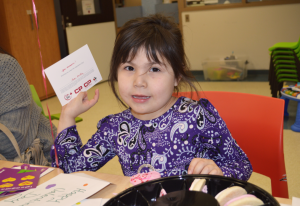 “CP is proud of the contributions we have made towards Jim Pattison Children’s Hospital’s Frog Pod helping to support the brave children fighting heart complications in Saskatchewan,” says Jeremy Berry, CP Managing Director Communications and Media Relations. “We’re excited to continue matching donations for the Frog Pod until the CP Women’s Open in Regina this August.”

“We saw children opening their Valentine cards while beaming with excitement,” says Brynn Boback-Lane, President and CEO of Jim Pattison Children’s Hospital Foundation. “The Share the Love campaign with Canadian Pacific has given these kids a very thoughtful surprise, and Saskatchewan has helped them to celebrate Valentine’s Day even while in hospital.”

Through the CP Has Heart campaign and in celebration of the 2018 CP Women’s Open in August, Jim Pattison Children’s Hospital Foundation is the official beneficiary of the seven day tournament. CP will be matching donations made here from now through to August 26, 2018.

View the photos from the special delivery of Valentine’s Day cards:
[SMGP id=15943]