A true champion stepped out onto the football field at Griffiths Stadium this past weekend.

Although he might not be a football player, 13-year-old Blake Wheeler has a story of tremendous triumph and it’s one he shared with the Saskatchewan Roughriders at their training camp in Saskatoon last Saturday. 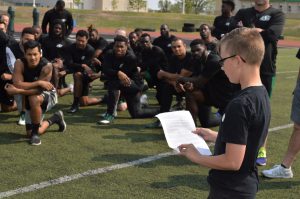 “The odds were stacked against me, but I grew into the kid you see standing here today,” Blake shared with the players.

The entire team took a knee and circled around Blake as he told them how he and his twin brother, Noah, were born 14 weeks premature. 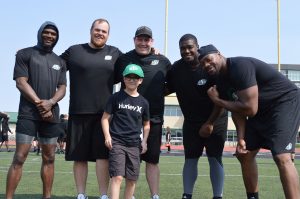 Heart murmurs were detected in both babies, but heart surgery proved to be too much for Noah, who tragically passed away 13 days after being born. Blake spent four months on ventilators, feeding tubes and IV lines. Finally, after 110 days in the Neonatal Intensive Care Unit (NICU), Blake was healthy enough to go home.

This year Blake is representing sick and injured children from across the province as the Saskatchewan ambassador for the Children’s Miracle Network Champions Program. 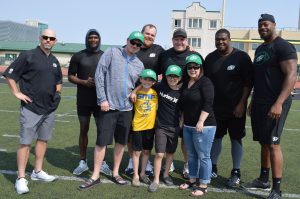 “My journey wasn’t easy,” Blake told the team. “Because of the care I received in the NICU, I’m a healthy 13-year-old who likes hockey, baseball, school, music and hanging out with my friends.”

After sharing his story, Blake got to meet members of the team, including players and coaching staff.

“We were extremely honoured to have Blake join us to share his story of perseverance,” said Roughriders Head Coach Craig Dickenson. 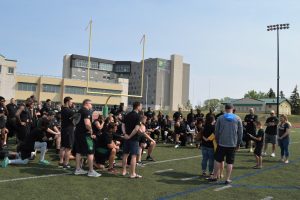 “It’s important for us as an organization to give back to the community and Blake inspired all of the Roughriders coaches and players not only with his strength but also through his commitment to making his community a better place,” Dickenson said.

“We are so proud of Blake, who is doing an incredible job as this year’s Champion Child,” said Brynn Boback-Lane, president and CEO of Jim Pattison Children’s Hospital Foundation. “His story has the ability to resonate with everyone from professional athletes to people from right across this province.”