Conexus Credit Union has a million reasons to celebrate the New Year. Conexus announced today that its Matching Funds Program in support of the Children’s Hospital Foundation of Saskatchewan reached its $1 million fundraising target. 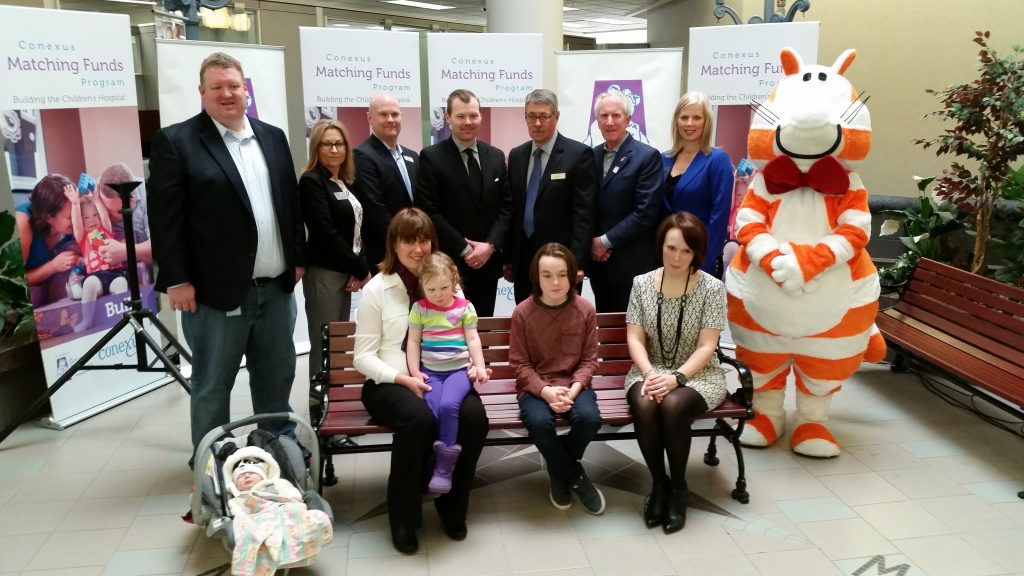 “We’re ringing in the New Year with fabulous news – we’ve reached our million dollar goal!” announced Eric Dillon, CEO of Conexus Credit Union. “In just 26 months our members, staff and the entire province reached deep into their pockets and donated knowing Conexus would match their generosity dollar-for-dollar! Today we are honoured to be part of building Saskatchewan’s children’s hospital.”

The Conexus Matching Funds Program was launched in November 2012 as a two-year initiative to raise up to $500,000 for the Children’s Hospital Foundation of Saskatchewan. Funds were raised by private donations, radiothons, twitter campaigns, golf tournaments and small fundraisers like BBQs and jeans days. Conexus also partnered with hockey clubs, radio stations, community groups and
businesses to support the cause. Every donation was then matched by Conexus to total $1 million.
Conexus announced the total today at its Sherwood Place Branch, 1960 Albert St.

“This gift from Conexus symbolizes the true Saskatchewan spirit of philanthropy,” added Brynn
Boback-Lane, CEO of the Children’s Hospital Foundation of Saskatchewan. “Hundreds of people were
inspired through this incredibly innovative campaign, knowing that their contribution would be
matched by Conexus. Our foundation is deeply moved by this generosity.”

“We thank Conexus Credit Union for their generosity and ongoing commitment to youth and families in
Saskatchewan,” said Health Minister Dustin Duncan. “With strong support from Saskatchewan people
and generous donors like Conexus, we will soon have a state-of-the-art maternal and children’s
hospital where patients will receive enhanced patient care.”

Conexus is proud to serve the people of Saskatchewan. Our strength is our belief in Saskatchewan, our ongoing commitment to local decision-making and our ability to offer a complete range of competitive financial solutions. Conexus is Saskatchewan’s largest and Canada’s sixth largest credit union. Conexus has $6.04 billion in total funds managed and approximately 116,000 members.

The Conexus Community Investment program provides broad support to member communities with an aim to make a measurable impact on the quality of life in our member communities. In 2013, the total value of investment was $2.10 million, with more than 570 community projects and events benefiting from this support.