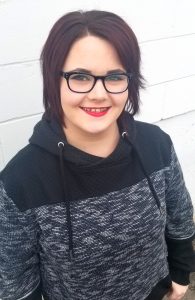 In 2007, Fiacco was chosen because of her brave struggle with a condition known as Familial Adematous Polyposis, which causes recurring growths in her abdomen. Fiacco, who is from Regina, was diagnosed with her condition at age 11. Micaella has had a total of 6 surgeries to remove growths in her large intestine and was continuously monitored and tested for additional tumors as they grew back. Family trips to Saskatoon were common every 6 months to see Micaella’s specialist and for an MRI.

After graduation, like many high school students, Micaella wasn’t sure what she wanted to pursue in post-secondary studies so she took a year off until she made the decision to go back to school for a Youth Workers Certificate at Saskatchewan Polytechnic. For two years she worked in the public school system in Regina as a teacher’s assistant but her health caused her to put her career on hold.

“It is hard for an employer to understand or to even try to understand what sick is like for me on a daily basis and how my stomach can be at times,” said Fiacco. “It was just a lot all at once, so I decided to take some time off of work to try and get things figured out.”

In 2007, surgeons removed Micaella’s large intestine and an 8 inch, 12 pound tumor from her stomach. She was told by doctors that other growths in her stomach were something she would have to live with because they were inoperable. Her only option was regular checkups to make sure the growths did not expand to become tumors.

Shortly after high school graduation Fiacco and her mother flew to see a specialist at Mount Sinai Hospital in Toronto for advice on how to control the growth of her stomach polyps. She was, however given the greatest hope last March when meeting with a colorectal surgeon in Saskatoon that another surgery could remedy her pain, give her more bowel control and a better quality of life.

Despite this great news, it came at a very personal cost. She was told that the scar tissue from another surgery could possibly prevent her from having kids, which has made her decision to go ahead with a seventh surgery a very difficult one.

“All my other surgeries were really life changing but this one is life changing on a whole new level but I know it will make my life better. I will be able to enjoy life instead of worrying about when my stomach is going to act up.”

The demands of her condition have led to depression and anxiety, which have caused Fiacco to take medication over the years to help her cope with her health better.

Despite Fiacco’s many health challenges, her philosophy on life continues to touch everyone she meets and she promises to carry her champion child experience into adulthood. Fiacco is determined to realize her goals of living a healthier life and soon walk through the doors of a new children’s hospital. Every time she travels to Saskatoon to visit family, friends or for appointments she makes a point of taking pictures of the children’s hospital in anxious anticipation of the grand opening late next year.

In the 11 years since she last participated in the Children’s Hospital Radiothon she is excited to tell her story again in the hopes that it will give comfort to sick children and more importantly to let them know that they are not alone.  You can listen to Fiacco’s story live on 620 CKRM, MY921.1 or 104.9 The Wolf during the Children’s Hospital Radiothon coverage, November 7th.

“I am nervous but very excited. Getting the chance to be part of it again is such a rush, a good feeling. It’s important to let listeners know what it’s like to still be around and be the adult that I am today. There was a point in my life where I didn’t think I was going to make it. I had gone through so much and to still be here today is the most wonderful blessing of life.”