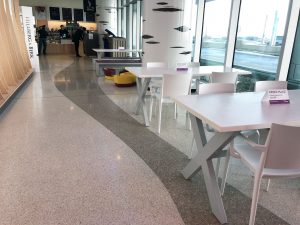 With Good Earth Coffeehouse newly opened in Jim Pattison Children’s Hospital, the nearby Picnic Place supported by Co-op is a special gathering area for families to enjoy food, a cup of coffee, and most importantly, spend time together.

Over the past decade, Co-op has been a generous supporter of Saskatchewan children and families in hospital. Federated Co-operatives Limited (FCL), on behalf of local Co-ops that make up the Co-operative Retailing System, has donated more than $2.4 million to Jim Pattison Children’s Hospital Foundation since 2010, which includes a $1.7 million commitment and sales of Game Day Approved products.

In recognition of this incredible generosity, the Picnic Place on the main floor of Jim Pattison Children’s Hospital has been named in honour of Co-op. The space features tables with benches and chairs, as well as small play structures for children to enjoy.

“Co-op is known for supporting Western Canadians and their communities,” said Lindsay Arnott, Social Responsibility Supervisor at Federated Co-operatives Limited. “FCL, on behalf of local Co-ops, is proud to know that our Picnic Place will provide a comfortable area for families during what might be uncertain or difficult times.”

Co-op made a major contribution to children’s health in 2013, with a $5 million donation to the five western Canadian children’s hospital foundations, of which Jim Pattison Children’s Hospital Foundation received $1.7 million.

In addition, thanks to Co-op members, customers, and dedicated Roughrider fans, sales of Co-op-Roughrider Game Day Approved products contributed around $700,000 to Jim Pattison Children’s Hospital Foundation from 2010 to 2016. The lineup of Game Day Approved products included memorable fan favorites such as Fantuz Flakes cereal, All Dressler chips, and Darian’s Darios. 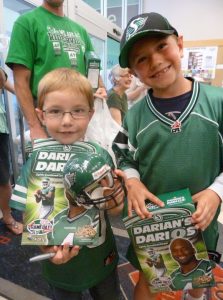 “We are tremendously grateful to Federated Co-operatives Limited, local retail Co-ops, and the members and customers around the province for their long-time support of Saskatchewan kids and families,” said Brynn Boback-Lane, President and CEO of Jim Pattison Children’s Hospital Foundation. “This unique picnic area is an incredible asset to the hospital, and it truly represents the incredible generosity our Foundation has received from the great people and vision of Saskatchewan Co-ops.”

If you would like to support special spaces, equipment and enhancements at Jim Pattison Children’s Hospital, please click here to make a donation.