More than $1 million has been generously donated to Jim Pattison Children’s Hospital Foundation by RE/MAX Saskatoon since 1993, with funds primarily generated through the Miracle Home Program. 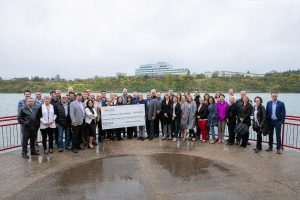 When a home is listed as a Miracle Home, it means that the listing RE/MAX Saskatoon agent of that property will make a donation to Jim Pattison Children’s Hospital Foundation after that property sells.

“’Doing well by doing good’ is a phrase coined by one of our agents years ago when we began our journey with Jim Pattison Children’s Hospital Foundation. At RE/MAX Saskatoon, our agents donate a portion of each transaction towards this most worthy cause and we are beyond proud to announce that we have now contributed over $1 million towards the construction of the new children’s hospital,” said Jeff Stewart, a managing broker with RE/MAX Saskatoon.

“Our journey with the foundation doesn’t end here, in fact it has inspired us to work harder and reach higher, as we bring cutting edge health care to the children of Saskatchewan,” said Stewart.

RE/MAX has been a national sponsor of Children’s Miracle Network since 1992. Since then, RE/MAX agents and offices across Canada have raised more than $56 million to help children receive quality care from their children’s hospitals.

“We want to thank the incredible RE/MAX Saskatoon agents for all the hard work they do year-round, as they support families both through their work and philanthropic gifts to the communities they serve,” said Brynn Boback-Lane, President and CEO of Jim Pattison Children’s Hospital Foundation. “Their continued dedication and deep commitment are truly making a difference, as Saskatchewan’s first dedicated maternal and children’s hospital is about to open its doors.”