Nine-year-old Cohyn Wells signed a special one-day player contract to become a member of the Saskatchewan Rush this weekend in the team’s tilt against the Toronto Rock.

As part of his contract with the professional lacrosse team, the Moose Jaw boy got his own jersey, player’s stall in the dressing room, and gear. Cohyn, Saskatchewan’s Champion Child presented by Walmart, also had the opportunity to read the Rush starting line-up to players before the game started, warm up with the team, and sit with the players on the team bench for the second quarter of the game.  He was introduced as the TD Kid Captain of the Game and, along with other child ambassadors, ran out with the players for the start of the game. It was all part of Children’s Hospital Foundation of Saskatchewan night at the game. 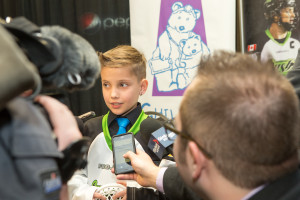 “It was awesome,” said Cohyn, who spoke at a media conference on Saturday night at SaskTel Centre.

Cohyn was born with spina bifida, hydrocephalus, and Chiari II malformation, which is a structural defect in the part of the brain that controls balance. Cohyn has also since developed syringomyelia, a rare, progressive disease that affects his spinal cord. Each of his surgeries has been accompanied by lengthy hospital stays and recovery periods. Cohyn’s first surgery took place when he was less than a day old. 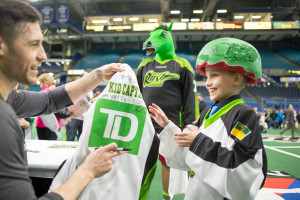 Saturday’s game was the culmination of week-long fundraising by the province’s newest sports team and TD Bank Group, who held an online jersey auction featuring custom jerseys supporting the Children’s Hospital Foundation of Saskatchewan. The limited edition jerseys were worn during Saturday’s game and autographed by each player. In addition to this week’s online auction, Limited Edition Chris “Captain” Corbeil Rush T-shirts were sold at the game by TD volunteer staff members. Donation bins were also set up at SaskTel Centre along with a Saskatchewan Rush auction table on the main concourse level, featuring autographed and game-worn equipment. 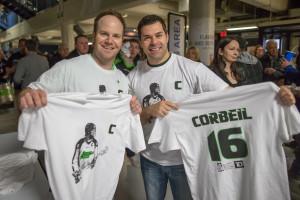 The jersey auction wrapped up on Sunday and the team will present the proceeds from this week’s fundraising at the April 2nd game at SaskTel Centre.