Saskatchewan is clearly a champion when it comes to supporting healthy children and families in the province.

Thanks to Co-op members, customers, and Roughrider fans across the country, the Co-op-Roughrider Game Day Approved partnership is making a $118,000 donation to the Children’s Hospital Foundation of Saskatchewan for the 2016 season. 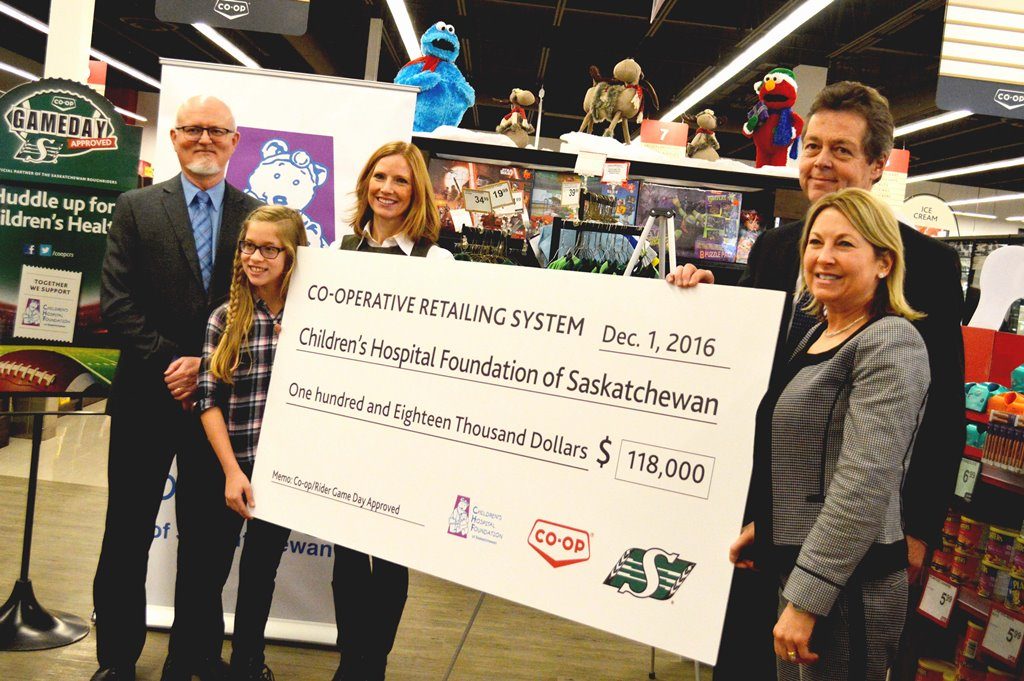 “The Game Day Approved partnership has been a lot of fun; it’s created conversations, engagement and expanded Roughrider collections,” said Vic Huard, Executive Vice-President of Strategy at Federated Co-operatives Limited. “The primary goal of the partnership, though, has always been to support children’s health. This has been a success thanks to our members, customers and, of course, the Saskatchewan Roughriders and their fans.”

This year’s total includes over $37,000 donated directly by customers at store checkouts, with the remainder being the result of proceeds from the Game Day Approved product line.

What started with Fantuz Flakes has grown exponentially to include a variety of green-themed food and merchandise – including this year’s Touchdown Teddy and Darian’s QB BBQ chips – that has netted positive yards for children’s health.

“We are extremely proud to have shared in the Co-op Game Day Approved partnership again this past season,” said Steve Mazurak, Vice-President, Sales and Partnerships, with the Saskatchewan Roughriders. “As an organization, we value giving back to numerous community programs, but being able to contribute to the Children’s Hospital Foundation of Saskatchewan is a special opportunity.”

“It takes a great team to build a children’s hospital and the partnership between Co-op and the Saskatchewan Roughriders has been like winning the Grey Cup on home turf,” says Brynn Boback-Lane, President and CEO of the Jim Pattison Children’s Hospital Foundation.

“We are tremendously grateful to Federated Co-operatives Limited, local Co-op retailers, the Saskatchewan Roughriders, and of course, to Rider Nation for supporting kids and families across the province through Game Day Approved products. This Saskatchewan spirit and generosity is allowing us to help care for kids in need, both now and in the future when the doors open on our new children’s hospital.”