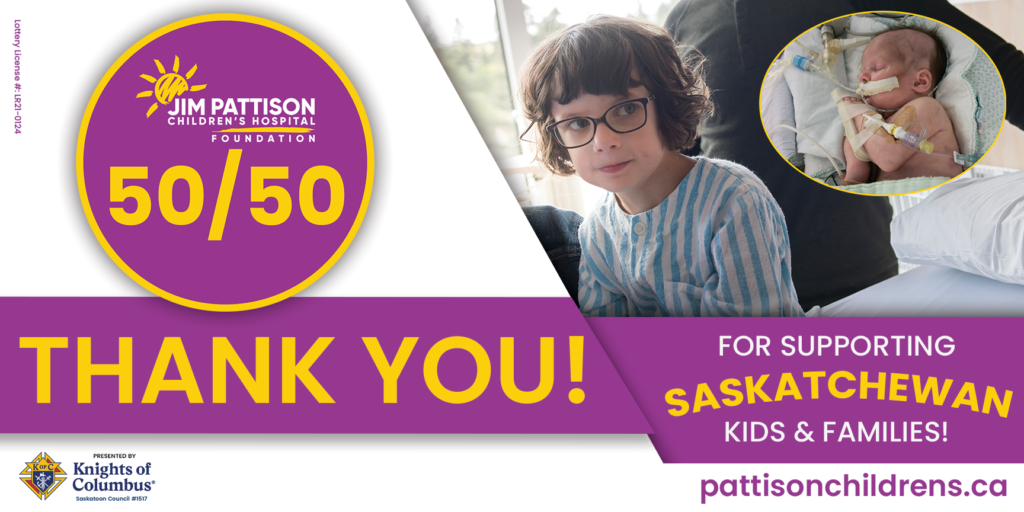 AND THE WINNER IS… LEORA NOKINSKY FROM NORQUAY, SK

Congratulations to Leora, the winner of the 2022 Jim Pattison Children’s Hospital Foundation 50/50 presented by Knights of Columbus Saskatoon Council #1517.

“I can’t believe it! I just thought of it as a donation. I have nine grandchildren so it’s really important to me to have a Children’s Hospital in Saskatchewan. It’s priceless,” said Leora when asked why she bought a ticket.

Saskatchewan’s Jim Pattison Children’s Hospital Foundation would like to thank our 50/50 presenting sponsor Knights of Columbus Saskatoon Council #1517, and Miracle Story Sponsor, BHP. A special thank you to CommAlert and everyone who purchased tickets! We are extremely appreciative of your support for families and kids who come from all across the province to receive specialized health care at Jim Pattison Children’s Hospital.

Elara lives with complex care needs, after being born with a rare congenital heart defect. Her chronic health conditions have led to numerous hospital stays and as a result, Elara was diagnosed with post-traumatic stress disorder (PTSD). 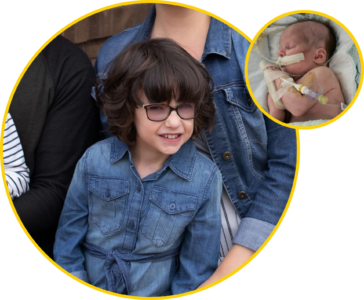 “PTSD is a challenge in kids because, to be frank, Elara only knows this life that she has,” said Elara’s mom Tara. “Elara doesn’t talk about the things that she has been through, she endures them. Despite all that, she loves going to the hospital, and we have always taken solace in that because it’s a testament to the care she gets there. But, we’ve learned that it is also related to PTSD, because she feels the safest at the hospital. It’s where she gets rescued.”

Elara sees a psychiatrist as a result of her struggles from living with complex care needs. Throughout her life, Elara’s mental health care needs have stemmed from hospital experiences as a child and growing up in that environment. Being so young, Elara would have difficulty differentiating between a normal situation and a serious medical situation.

“She developed difficulty going to sleep because as she got older she didn’t understand the difference between asleep and falling asleep for surgeries,” said Tara. “With help, we have been able to repair that narrative for her and she now understands the difference between sleep and sedation. Now more than ever, children with chronic illness need mental health support.”

On August 25, 2020, 7-year-old Jaxon Guthrie was involved in a quad rollover and had to be airlifted to Jim Pattison Children’s Hospital in critical condition. He sustained skull fractures, a broken jaw, and had several strokes as a result of the accident. 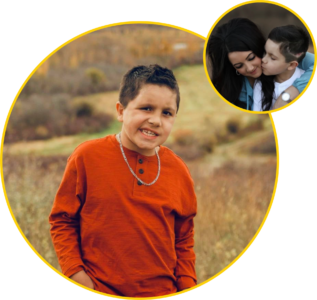 Megan, Jaxon’s mom, drove with her parents to Saskatoon and waited while Jaxon underwent brain surgery for 5 hours. Following surgery, Jaxon was admitted to the Pediatric Intensive Care Unit, where he received round-the-clock intensive care for months. It was two months before Megan would hear her son’s voice once again as he mumbled the words his mom sang to him.

Jaxon was tube fed for 80 days in total, so seeing him finally able to eat again was a momentous occasion. By November, he was taking his first steps since before the accident, a sure sign that he was on the road to recovery. Multiple strokes greatly affected the left side of his body. Progress was slow at first as Jaxon began to move his left leg & left arm, but he has continued to gain strength and make huge strides thanks to physiotherapy.

Now in 2022, Jaxon continues to regain more movement in his left arm and hand and is an active nine-year-old. He works hard in school and enjoys friends and family gatherings. His positive outlook and sense of humour make some of his daily challenges easier to manage and he’s a true warrior, in his own words.

Kyla and her family got the surprise of their lives when they found out she was pregnant at the age of 41. She had been told conceiving naturally may not happen at her age, so Kyla, her husband, and their two children were very excited to welcome a new member to their family after hearing the news! 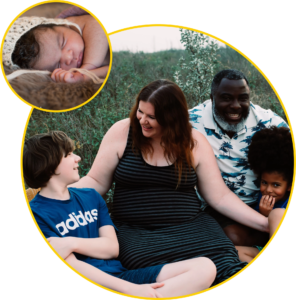 Kyla went to Jim Pattison Children’s Hospital (JPCH) for Maternal Screening to check on the baby, and the results came back with a high percentage of risk. “It was devastating for us as we were already worried about this baby,” said Kyla. More results indicated baby was healthy, but as a precaution, at 36 weeks Kyla started being monitored weekly at JPCH until the baby was born.

“Having this excellent prenatal care and access to amazing birthing rooms has alleviated a lot of my worries. I cannot be more thankful that Saskatoon has such an amazing hospital for maternal health, as women deserve the care it delivers,” said Kyla.

Kyla was scheduled for an induction at 40 weeks due to maternal age and Gestational Diabetes. Beautiful baby Hazel arrived happy and healthy weighing 9lbs at Jim Pattison Children’s Hospital. Kyla and her family were extremely pleased with their experience as she reflected on her maternal journey.

“Being able to stay in one room the entire time was a huge difference from when I had my first child 14 years ago. There was more privacy, dignity, and respect during every stage, and having my own bathroom and shower was a game-changer. It was so great to be able to stay in the same room after giving birth, and for my husband to have a bed to sleep in as well. Thank you to Jim Pattison Children’s Hospital for putting women’s health as a top priority, especially for such an important time in our lives!” said Kyla.

At the 20 weeks ultrasound, Braidyn’s parents found out there was a pregnancy complication called placenta previa. In January 2021, mom was admitted to Jim Pattison Children’s Hospital (JPCH) with severe hemorrhaging and they knew baby was going to arrive early. 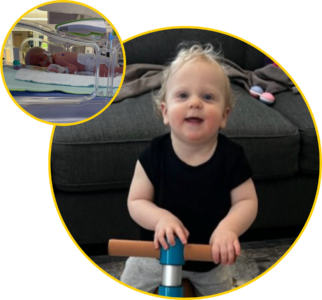 After a couple of roller-coaster days in the hospital, Braidyn was born, 9 weeks early, weighing 4 pounds 1 ounce. “I remember getting a glimpse of him as they brought him past us. His chest looked like it was caved in,” said Jess, Braidyn’s mom. Braidyn was rushed to the Neonatal Intensive Care Unit where he stayed for 29 days before he was able to go home for the first time.

“Our experience at Jim Pattison Children’s Hospital was wonderful. The staff were beyond amazing and did everything right to help our little guy and myself have the best chance. The doctors and nurses ensured we were kept abreast of progress, issues, and plans and in a way we understood. Even though I wanted nothing more than to bring my little guy home, I knew it was the best possible place he could be,” said Jess.

Today, Braidyn is doing amazing! At his one-year check-up, he was 70th percentile for both weight and height and is hitting all his milestones.

13-year-old Sascha is an empathetic, kind, generous young man who likes to swim, practice tae kwon do, play video games, and read about science. While coping with all of life’s challenges as a teenage boy, Sascha is also dealing with Obsessive-Compulsive Disorder (OCD), Attention-Deficit Hyperactivity Disorder (ADHD), Tourette’s Syndrome, and Anxiety. 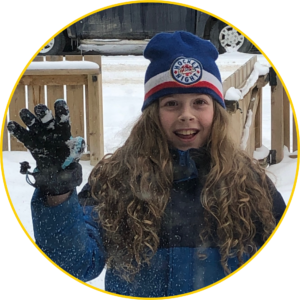 When Tourette’s Syndrome was added to Sascha’s diagnoses, and with no place in Saskatchewan providing programs for Cognitive Behavioural Intervention for Tics (CBIT), Johnna (Sascha’s mother) took matters into her own hands. She researched and purchased help books for their family and classroom nurse to become further educated on how to help Sascha at home and in school.

“We need to give Sascha the tools to help him be successful, and put him in a place where his ADHD and other diagnoses are just part of what makes him who he is. Sascha has many gifts and talents, and he is only going to get better at managing his set of challenges,” said Johnna.

“When I’m at home with my parents and cat, I don’t have to try to contain all my diagnoses. And for anyone with my diagnoses, if you work hard and devote yourself, it will get you to your destination,” said Sascha.

Read the Rules of Play

Congratulations to Leora Nokinsky, the winner of the 2022 Jim Pattison Children’s Hospital Foundation 50/50 presented by Knights of Columbus Saskatoon Council #1517.

“I can’t believe it! I just thought of it as a donation. I have nine grandchildren so it’s really important to me to have a Children’s Hospital in Saskatchewan. It’s priceless,” said Leora when asked why she bought a ticket.

Saskatchewan’s Jim Pattison Children’s Hospital Foundation would like to thank our 50/50 presenting sponsor Knights of Columbus Saskatoon Council #1517, and Miracle Story Sponsor, BHP. A special thank you to CommAlert and everyone who purchased tickets! We are extremely appreciative of your support for families and kids who come from all across the province to receive specialized health care at Jim Pattison Children’s Hospital. 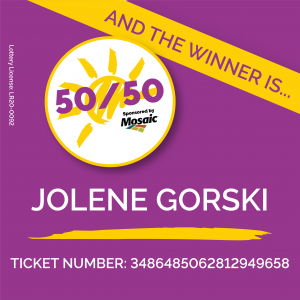 Congratulations to Jolene Gorski, the winner of the 2021 Jim Pattison Children’s Hospital Foundation 50/50 sponsored by The Mosaic Company.

Jim Pattison Children’s Hospital Foundation would like to thank the 50/50 presenting sponsor The Mosaic Company. The foundation would also like to thank its Miracle Story sponsors Broda Group, Graham Construction, Duane and Bev Smith, Innovation Credit Union, and CommAlert.