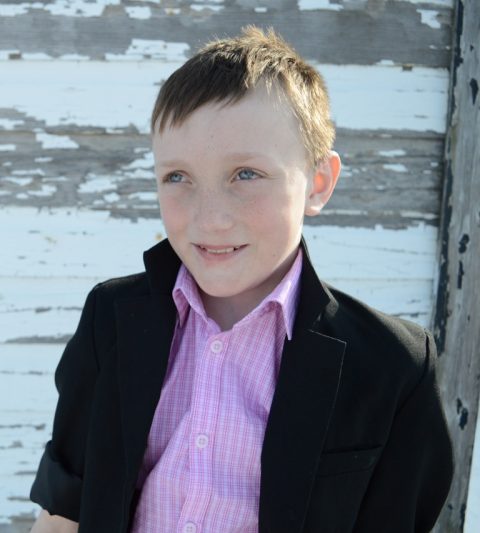 For 11-year-old Braden, a breath of fresh air is hard to find. After being diagnosed with Cystic Fibrosis at age five, every day is now spent searching for his second wind.

Braden’s story began with a premature birth five weeks early. He had difficulty breathing and only weighed four pounds, six ounces. He spent 17 days in the Neonatal Intensive Care Unit (NICU) but had trouble gaining weight. As the months went on, the boy from Carnduff, SK routinely saw a doctor but still weighed only 25 pounds by the time he was five years old. Braden had reoccurring chest infections, chronic bronchitis and asthma.

After some testing and a trip to Alberta Children’s Hospital in Calgary to get his adenoids removed, the verdict was Cystic Fibrosis.

“I thought they were wrong,” says Braden’s mom Kelly. “We were scared and didn’t know what it meant, so there was a lot of learning to do. Hearing that our child has a terminal disease that is treatable but not yet curable was unbearable news.”

His diagnosis left him and his family with no other option but to adjust to a new normal. Feeling like they were at a loss and not knowing where to begin, his parents desperately researched the disease before they could begin taking the next steps towards caring for a child with Cystic Fibrosis. It was all unexpected and the most important thing they remembered was to take it day-by-day.

Braden’s treatment involves lung exercises twice a day, inhalers twice a day, special vitamins and enzymes to slow his body systems down so he can absorb nutrients. He regularly takes antibiotics and has a daily regime of medicine on top of being tube-fed throughout the night in order to gain weight and get the extra nutrition he needs.

Adjusting to a new normal is not without obstacles as Braden now has to live with extra caution. In the new Jim Pattison Children’s Hospital opening in 2019, he will particularly benefit from the private rooms since he is vulnerable to the exposure of bacteria and viruses. Braden and his family are also excited about the specialists being recruited to Saskatchewan to care for kids with lung and breathing problems.

“Although living with his condition has taken a toll on his well-being, he keeps his head held high and interacts with kids at school effortlessly when explaining his lifestyle,” says Kelly. “We strive to keep as active as we can and he’s built a strong mentality of living life to the fullest.”