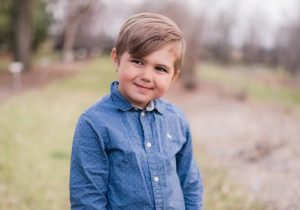 The hearts of the Reis family shattered on February 2, 2021 when they learned the neck pain their four-year-old, Jett, was experiencing was far more serious than they could have imagined. 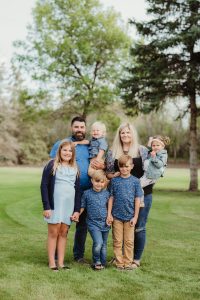 Jett was diagnosed with a rare and incurable brain tumor known as diffuse intrinsic pontine glioma (DIPG). The young boy is now bravely facing radiation treatment at Jim Pattison Children’s Hospital’s Oncology Unit for his aggressive and inoperable tumor. The Unit is located on the main floor, close to the pediatric outpatient clinic, also known as the Les and Irene Dube Centre of Care for Children.

“This diagnosis was unheard of for us until we came across it in a way you’d never want to,” said Jett’s father Manny. “It’s pretty heart wrenching every day walking through the hospital with him, but he’s a soldier and he gets through it. He’s four years old and he’s doing these treatments without being sedated, which is a pretty big deal.” 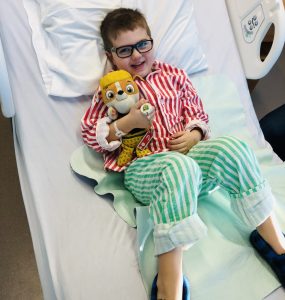 Jett began experiencing headaches and neck pain last summer, but blood work and eye exams showed nothing to be concerned about. He continued on as an energetic four-year-old and even volunteered to shave his head in support of his grandfather “Gido” who was undergoing chemotherapy treatment for cancer. The family never guessed that only a few short months later, their son would face his own cancer diagnosis.

Saskatchewan doctors have seen few cases of DIPG, so the family has engaged with a community group based out of the United States that offers them a network of support and information. Currently, they are watching closely to see what clinical trials are available and if Jett will be eligible depending on how his radiation treatments pan out.

“The doctors here are very helpful and willing to work with other doctors, it’s a team effort,” said Jett’s mother Larisa. “We have hope and we have each other.”

Jett has dreams of going to kindergarten in the fall and becoming a police officer one day. His four siblings are what gives him strength and he is always thinking of them before himself. A GoFundMe page has been set up for the Reis family to help ease the financial burden going forward. 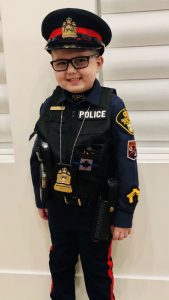 “It’s hard to put into words how amazing Jett is,” said Larisa. “He’s been a champ through this journey so far and somehow he’s helping us get through it. We should be helping him but he’s the one who is helping us. He’s so brave, he’s so smart and he’s wise beyond his years.”

If you would like to support kids like Jett, you can designate a donation to pediatric oncology at Jim Pattison Children’s Hospital Foundation.