#KimmelCares Campaign Takes Off in a Big Way

Wiegers Financial and Benefits is hoping talk show host Jimmy Kimmel will be the highlight of its Care for Kids by Wiegers “Alice in Funderland” fundraiser in Saskatoon on June 1st.

Earlier this year, the group launched a social media campaign using the #KimmelCares hashtag to encourage Kimmel to come to Saskatchewan. Part of the campaign included the creation of a video featuring Saskatoon Mayor Charlie Clark, Chief of Police Troy Cooper, Prince Albert comedian Kelly Taylor and local radio personalities Sauna Foster and Rob Suski. It has been viewed nearly 125,000 times so far. 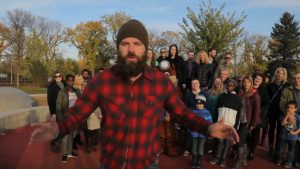 Prince Albert Comedian Kelly Taylor in the Care for Kids by Wiegers video.

The group reached out to Kimmel because his son Billy was born with a rare heart defect that required immediate open-heart surgery when he was just three days old. A second surgery followed at 7 months and it’s expected that Billy will undergo future surgeries as well.

“Jimmy had a son recently that was born with heart defects and had complications where he barely pulled through. We reached out to him because, as a parent, he understands,” explained Colton Wiegers, Business Development Manager at Wiegers Financial & Benefits.

Wiegers hopes the video, made in the style of a Kimmel skit, will appeal to the comedian’s sense of humour and attract someone from his public relations team to take notice.

“We did our research. We knew if we were to reach out to him we couldn’t make a simple video saying we want your help. We wanted to do it in a way that got him and his team excited,” said Wiegers. “We think childcare is super important and we understand the importance of having it accessible for everyone no matter where you live in the province. We think our message aligns with Jimmy Kimmel really well. I hope that will be his motivation to get involved with us.”

Celebrity endorsement has always been a big marketing tool for Care for Kids by Wiegers. Their first event in 2009, which featured Saskatchewan singer Carrie Catherine, raised about $50,000. Since that time their fundraiser has grown to include high profile names such as ex-Canadian Idol contestant Theresa Sokyrka, plus comedians Brent Butt, Rick Mercer and Shaun Majumder.

Tanya Matsalla, Marketing Communications Coordinator for Wiegers, said finding a celebrity who is the right fit is important.

“Our hope is to find celebrities that understand the reason and have a passion for why we are doing this,” said Matsalla. “They will help raise the visibility of the event and the awareness of it. The bigger the celebrity the broader the reach.” 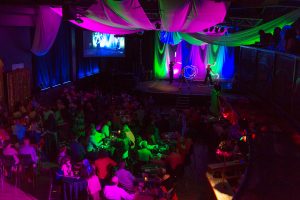 Wiegers has also made a life-sized cardboard cut-out of Kimmel that local businesses are sharing to further promote the event.

This year their fundraiser is moving to the World Trade Centre Saskatoon at Prairieland Park to accommodate growing demand with capacity for up to 450 guests or more. Debra Wiegers said they were forced to hold back their numbers at their previous venue. In their new location, she promises supporters will enjoy a fun and comfortable night out.

Care for Kids by Wiegers has held five events in the last ten years raising $862,164 for Jim Pattison Children’s Hospital. The most recent $310,000 donation funded a surgical suite and induction room at the new children’s hospital.

Wiegers has signed on to host three more fundraisers, which includes their event in June. Their goal is to raise $1 million.