As students start to settle into the routine of back to school, young patients in Jim Pattison Children’s Hospital are also finding a sense of normalcy in their studies thanks to an incredible donation. 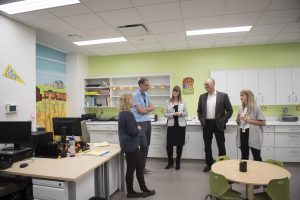 Grant McGrath, president of Western Sales, along with his family, have generously donated $1 million to support a special school room in the Pediatric Inpatient Unit on the second floor of Jim Pattison Children’s Hospital.

“Our family is very excited to make this contribution towards the school room in Jim Pattison Children’s Hospital,” McGrath said. “With strong roots in Saskatchewan, our family is proud to support the new children’s hospital, which is making such a great difference in the lives of families from across the province.” 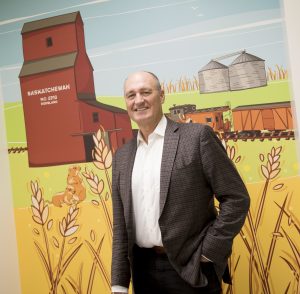 During hospitalization, children often miss a significant number of school days, which can upset their routine and amplify stress levels. The children’s hospital school room helps support Saskatchewan’s young learners by giving them a space to continue their studies with as little interruption as possible.

The school room has plenty of resources for kids, including books, computers, tablets, textbooks and other school supplies. The classroom also includes a prominent agricultural mural, which features a red grain elevator in the village of Dodsland, Sask. It’s a place that holds special meaning for McGrath, as it represents where he grew up.

McGrath started in ownership and management of operations of Western Sales in 1986 and stepped into the role of sales manager in 1987. In 2000, McGrath then became president and general manager of the company. Western Sales is a John Deere equipment dealership, serving six locations throughout West Central Saskatchewan, including Rosetown, Biggar, Central Butte, Davidson, Elrose and Outlook.

“In this season of Thanksgiving, we are incredibly grateful for the generosity shown by the McGrath family,” said Brynn Boback-Lane, President and CEO of Jim Pattison Children’s Hospital Foundation. “This is a very special contribution that will ensure children, especially long-term patients, are able to continue their education with the provision of a dedicated classroom within the new Jim Pattison Children’s Hospital. The McGrath family’s contribution gives the gift of education, participation and inclusion, so that kids can reach their educational potential while in hospital.” 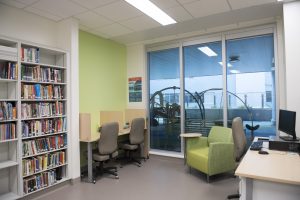 The school room is home to the Jim Pattison Children’s Hospital School Program, which provides academic support to hospitalized students from kindergarten to high school. The program is staffed with two teachers from Saskatoon Public Schools, who work with the patients’ schools to provide missed assignments and instruction.