After two years of marriage and uncertainty on if a baby would ever happen, Deidra and Justin couldn’t believe their eyes when they saw the pregnancy test. 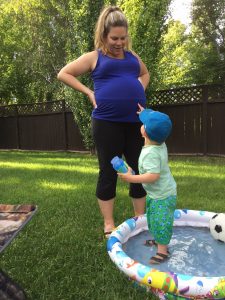 Overjoyed, the Saskatoon couple found a doctor right away and kept up with protocols to ensure a smooth pregnancy and healthy baby. Baby’s heart beat and blood pressure continued to read flawlessly and Deidra was measuring just right. Deidra was a RH negative mom, meaning she would need a WinRho shot, but it was nothing to worry about. With everything going perfectly, they never thought a simple hospital visit for the WinRho shot would suddenly be a turn for the worse.

“[The doctor] explained to me that every RH negative mom gets this shot at 28 weeks pregnant and when the baby is born. So at 28 weeks I went to my appointment, got my shot and I thought I was good to go,” explains Deidra. “Shortly after my shot, I was informed it didn’t work for me. It has a 99.9% rate of working and it didn’t. Once this discussion was addressed, everything going easy was gone. I was deemed a high-risk pregnancy, I would be at appointments weekly if not more, and I would now be with a specialist until the baby comes.”

With a sinking heart, Deidra’s excitement turned to fear and sadness. The doctors explained there was a 95% chance that her blood would attack the baby’s blood cells. Visits to the Fetal Assessment Unit up to three times a week were the new normal for Deidra. At 31 weeks, one routine appointment took another turn for the worse. As five nurses rushed into the room, Deidra was told she has blood pressure problems.

“The specialists came in, sat down on the side of the bed and started explaining, ‘Your baby is under three pounds and is having a tough time. Its heart rate is going down and your blood pressure is going up. It needs to come out now,’” remembers Deidra. “I stared at my husband and I cried. I was told it was safer at this point for the baby to be out than in, and I cried some more.” 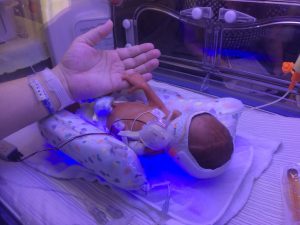 Immediately, Deidra was rushed to the operating room and hooked up to a fetal monitoring system. The baby’s heart beat continued to lose strength as an emergency c-section was performed. Before she knew it, baby Lucas had arrived weighing two pounds, 11 ounces. Deidra caught a quick glimpse of Lucas for 15 seconds before he was whisked away to the Neonatal Intensive Care Unit (NICU).

Deidra met baby Lucas 17 hours later and held him for the first time on day five. Unfortunately, the next day he went into quarantine and Deidra had to wait another five days to hold him. As Deidra describes, Lucas would often take four steps back before taking one step forward. After 49 days, Lucas had grown to four pounds, four ounces and was finally able to go home. 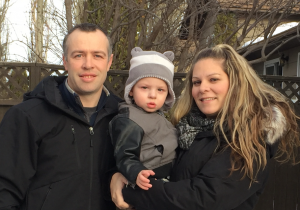 A year and a half later, Deidra and Justin tried for baby number two. With Deidra’s condition, every pregnancy meant an increased risk of her blood attacking the baby’s blood. Sadly, they lost baby number two to a miscarriage. Plans for baby number three were now considered with more caution than ever. Deidra was given a vaccination for chicken pox, and after a lengthy waiting process to get pregnant again, they were now expecting.

“My anxiety levels were high. So high that I was terrified through almost the whole pregnancy,” says Deidra. “Once we hit the same week as my first was born, my anxiety hit the roof. They told me, ‘one more week, one more week.’ As soon as I hit 35 weeks, we started making a plan.”

Deidra was admitted for induction, but with concerns over the pressure around baby’s head, another c-section was quickly underway. Baby Caleb was born quickly weighing six pounds, 13 ounces. This time, Deidra spent a whole minute with her new baby boy after he was born before he was rushed to the NICU. Deidra did not experience blood pressure problems this time, but Caleb needed blood exchanges. Doctors became concerned over the blood flow to his brain, but on day 10 he was cleared of brain damage risk. Caleb was given two more days to prove himself, and being the strong fighter he was, he was brought home to meet big brother Lucas on day 13. 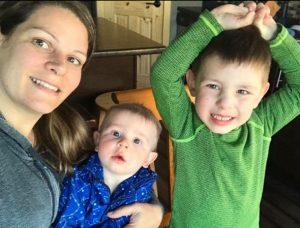 Today, Deidra loves being a stay at home mom to her two boys. Doctors are still looking into Deidra’s rare condition and striving to discover possible clues from her high-risk pregnancy to help other moms. The risks that will come with another baby are extremely high, so the family has decided to stay a foursome with two healthy and happy boys.

To support maternal health in Saskatchewan and mothers like Deidra, please make a donation to the ‘Make Mom’s Day’ Mother’s Day campaign here.