Sunday marked a historic day for maternal and pediatric health care in Saskatchewan. The very first maternal and pediatric patients of Jim Pattison Children’s Hospital moved into the brand new facility. Read more about some of the kids and their families who were apart of the first patient day at the new hospital.

At only two-years-old, little Maheera from Saskatoon has already made history. Just after 7:o0 a.m. on Sunday morning, the wheels started moving on her bed in the former Pediatric Intensive Care (PICU), where she’s spent the last few days with pneumonia. Maheera was the very first patient to be moved into Jim Pattison Children’s Hospital and then into the new 18-bed PICU. 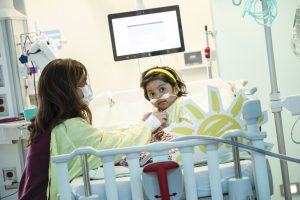 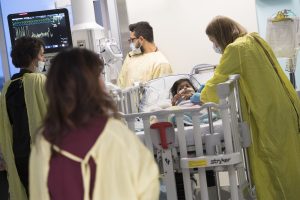 “I love it!” exclaimed Nash, as he was being wheeled into the new hospital on Sunday morning. The three-year-old was soaking up every bit of his new surroundings, as he made the move into his room in the new 45-bed Pediatric Inpatient Unit. Nash has already spent his fair share of time in hospital, after being diagnosed with a brain tumour last December. Just days later, he underwent surgery and most of the tumour was removed. Now Nash and his family make weekly trips from Macklin to Saskatoon for chemotherapy. Nash was able to go home later on Sunday, following his chemotherapy treatment in the new hospital.

“We are really looking forward to the new rooms, and also the play centres and the theatre. I think Nash will have a lot of fun with those,” said Nikki, Nash’s mom. 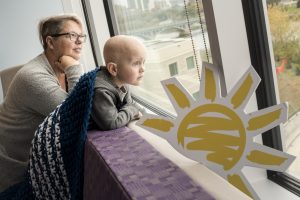 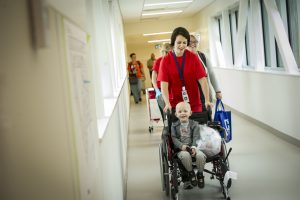 When Willow entered the world, it was certainly a whirlwind of a weekend. Her parents, Sarah and Cory, were enjoying a camping trip to Yellowstone National Park at the end of August, ahead of their baby girl’s due date in December. The babymoon vacation was going great for the Saskatoon couple, until Sarah felt something just wasn’t quite right. That’s when the couple decided to head back to the Canadian border, stopping at the hospital in Swift Current. Sarah was going into early labour at 26 weeks of pregnancy and needed specialized care. The couple made the three-hour trek to Saskatoon, where Sarah underwent an emergency C-section. Willow was born 14 weeks premature on Sept. 2 and has been staying in the Neonatal Intensive Care Unit. On Sunday, Sarah held her daughter for only the fourth time ever, this time in their own private room.

“All of the staff in the NICU are amazing and were always accommodating to make space for us and help us to still feel like parents in a very busy environment, but this extra space and privacy will help us all be a bit more relaxed in a very stressful situation,” said Sarah. 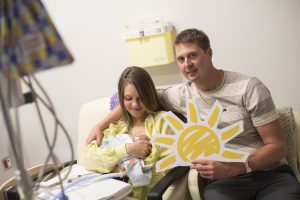 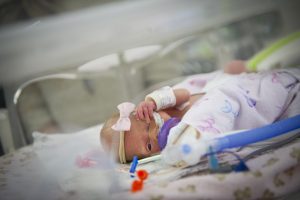 At only one-year-old, little Emmet is a fighter. He has been diagnosed with nephronophthisis, a very rare condition which affects his kidneys. He spent much of the first year of his life in the NICU, Acute Care Pediatrics and PICU. The Saskatoon boy is currently on dialysis for 12 hours each night. Now at only 16 months old, he’s already undergone multiple surgeries and is currently waiting for both a kidney and liver transplant. Emmet and his family were moved into the new Pediatric Inpatient Unit.

“This new hospital feels very kid-friendly, especially with all of the murals. It makes it more like a home for kids and families,” said Emmet’s mom, Brittney. 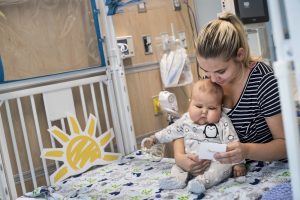 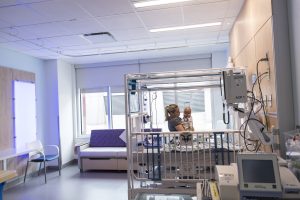 Ellie came into the world on Sept. 27 at 10:23 p.m., weighing exactly eight pounds. Her parents, Meaghan and Spencer, were so excited to meet their first child. On Sunday, Ellie and her family were one of the last postpartum families to be moved from the previous unit, into one of the 65 private patient rooms in the new Maternal Care Centre.

“The move to the new hospital was such a magical experience. We had someone waiting for us and greeting us at every corner and entrance. The nurses and team were all so emotional, it was hard to not tear up. Seeing all the emotions of the doctors and nurses just shows how much they care,” Meaghan said. 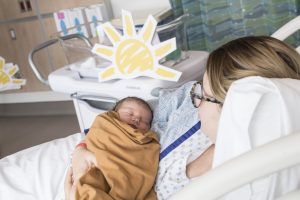 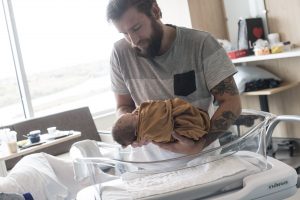 There were a lot of smiles when five-year-old Zoey, her mom, and Elmo rolled their way from the previous PICU and into their room in the new unit. For more than two weeks, the Regina family has been spending time in hospital. Zoey required respiratory support after getting a common cold, as a result of a rhinovirus infection. As Zoey and her mom were getting settled in their new room, they said it’ll be nice to have some sunshine thanks to the bright windows.

“She has already done a lot of sleep studies, so we’re looking forward to the sleep lab in the new hospital. I think the new peds unit will also be a really nice change,” said Pam, Zoey’s mom. 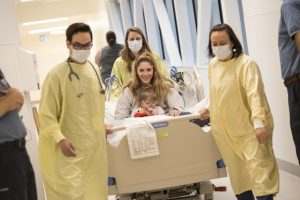 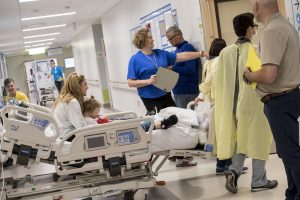 In total, 112 maternal and pediatric patients moved to their new patient rooms inside the new hospital on Sunday morning, with the move completed by 11:31 a.m.

“Our Saskatchewan families now have access to the highest quality of care possible, as we start this new chapter in maternal and pediatric health care,” said Lynn Redl-Huntington, Vice-President, Communications at Jim Pattison Children’s Hospital Foundation. “This hospital represents years of vision, dedication and incredible generosity from Saskatchewan people. The Foundation will continue raising funds for Jim Pattison Children’s Hospital for the generations of families that will benefit from this world-class facility.”