A whimsical bronze sculpture at Jim Pattison Children’s Hospital is now offering a warm welcome to kids and families from across the province. 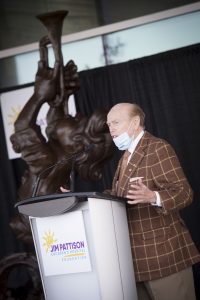 “The Trumpeter” monument was officially unveiled outside the main doors of Jim Pattison Children’s Hospital in Saskatoon on Sept. 17, as a tribute to Jim Pattison and in honour of the children and families of Saskatchewan. This is also in celebration of the first anniversary of the opening of the hospital. 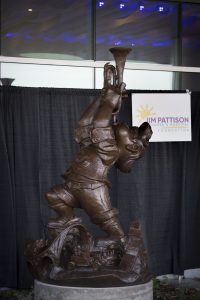 Created by western Canadian visual artist Ryan Kurylo, the bronze sculpture features a boy enthusiastically playing the trumpet. Different transportation elements circle the bottom of the monument including vehicles which can be interpreted as a transportation vehicle to one’s dreams, bridges that offer the spirit of connection, and train cars to symbolize a circle of care; all elements that bring a Saskatchewan flair and Pattison’s own dreams to the 8-foot structure. An iconic silhouette of a grain elevator also reflects and celebrates the people of Saskatchewan. Kurylo worked closely with Jim Pattison Children’s Hospital Foundation to conceptualize a monument that would encompass Pattison and act as a symbol of hope for children of all ages.

Jim Pattison Children’s Hospital officially opened to patients on Sept. 29, 2019. The 176-bed hospital is designed for the care and comfort of pediatric and maternal patients offering state-of-the-art equipment and facilities.