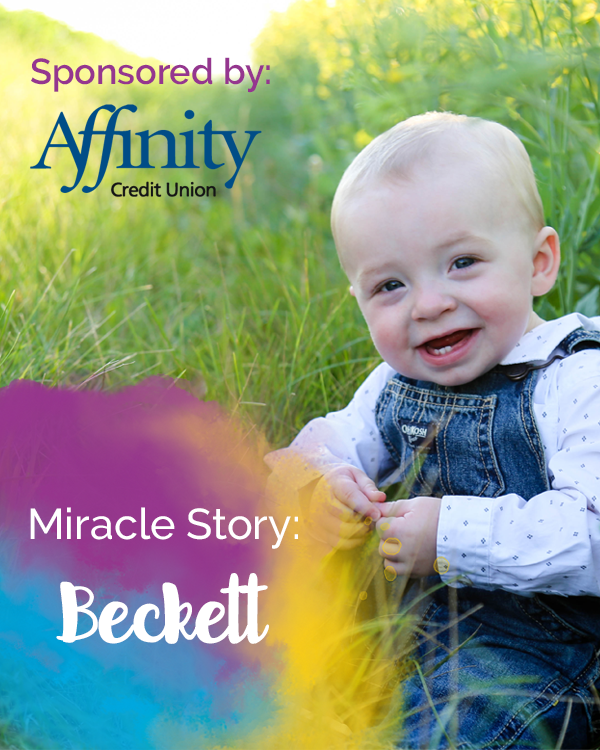 Your donation in honour of Miracle Story Beckett will be matched by Affinity Credit Union!

Like any baby, little Beckett of Swift Current spent his first year of life learning to laugh, crawl and babble. What made his first year different from most, however, was a devastating diagnosis of Infant Acute Lymphoblastic Leukemia at only two months old.

How such a harsh disease could affect such a tiny baby was difficult for Beckett’s parents to understand. With 198 days in hospital, 287 doses of intense chemotherapy, 4 access lines, 15 surgeries, 28 tests and scans, 31 blood transfusions, 9 feeding tubes and 133 blood draws, Beckett’s first year was a whirlwind. Chemotherapy hit his little body very hard, but his team of doctors and nurses did an exceptional job of giving Beckett the best chance for a future.

Nine months after the diagnosis that flipped their world upside down, Beckett’s family was finally discharged from hospital. Upon arriving home, Beckett was immobile and required a feeding tube. He didn’t know how to play with toys or interact with the world around him, and he still required maintenance therapy which included a daily chemotherapy drug.

Slowly but surely, Beckett began to hit his development milestones. He now runs around like an active toddler, but still needs weekly speech therapy and chemotherapy. Because his immune system is weak, he doesn’t get much interaction with other kids, but Beckett is on his way to beating the disease once and for all.