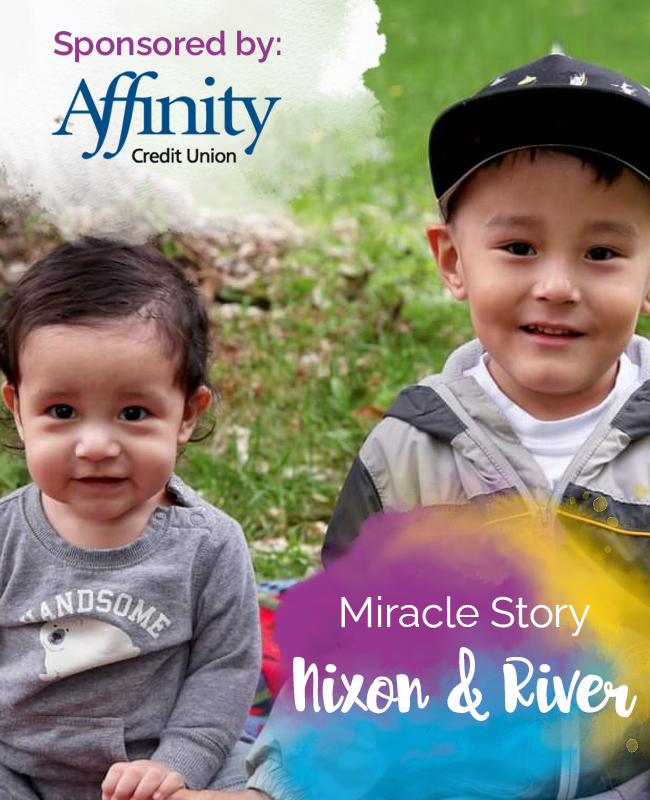 Your donation in honour of Miracle Story Nixon & River will be matched by Affinity Credit Union!

Chances are survival are dangerously low for a baby born 16 weeks early, but Nixon was a fighter.

Weighing only one pound, eight ounces, Nixon was rushed to the Neonatal Intensive Care Unit immediately after birth where he was hooked up to machines that barely fit his tiny body. On the way out, he was wheeled up to mom’s bedside so she could get a brief glimpse of her fragile yet bold little fighter. It was only a five second moment shared between mom and baby before he was whisked away.

For 12 weeks, Nixon was intubated and couldn’t breathe on his own. After four and a half months of fighting and reaching milestones, Nixon was finally able to go home. Nixon is now almost four years old and is healthy, happy and thriving.

Nixon’s little brother, River, was born in November 2019. This time around, baby was 10 days late. River was sent to the NICU following birth where doctors discovered he was hypotonic, meaning he had low muscle tone. He required further medical testing and stayed in the NICU for 10 days. Today, River is growing normally and learning lots from his big brother, but will still require occupational and physical therapy at Jim Pattison Children’s Hospital as he grows.

Your support during this year’s Radiothon will help kids like Nixon and River receive the best care possible, right here at home!