Theodore Jon Lyle Guenther waited an extra week to make his entrance into the world, and it certainly was a memorable one. 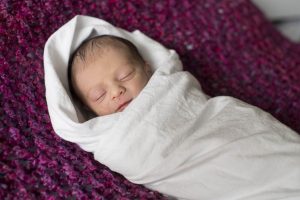 “He was actually due on the 21st, so I think he waited it out,” joked his mom, Jessica Zakoor.

It turns out, it was worth the wait, as Theodore was the very first baby born in Jim Pattison Children’s Hospital. He was born at 2:32 p.m. on Sunday, Sept. 29, weighing five pounds, two ounces.

“I just thought we’ll be at the old location and that’s fine, but surprise and we’re here,” Zakoor said.

Theodore’s parents, Jessica Zakoor and Layne Guenther from Saskatoon, were greeted with a very warm welcome to the new hospital on Sunday morning, after the facility officially opened to maternal and pediatric patients.

“It feels amazing,” said Zakoor, reflecting on being the first to give birth in the new hospital. “[Sunday] was quite the experience being in labour and coming in and everyone cheering us on, it was special.”

“When we arrived, when Layne was wheeling me in the wheelchair and everyone was literally cheering us on and saying you’re the first to arrive,” recalled Zakoor. 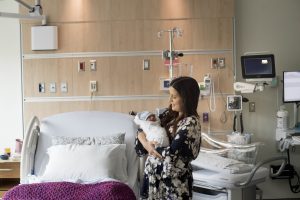 The Mosaic Maternal Care Centre on the third floor of Jim Pattison Children’s Hospital is home to an innovative new model of care, known as Single Room Maternal Care. Now moms-to-be, just like Zakoor, labour, deliver and stay with their new baby and supportive partner all in the same private room until they are ready to leave the hospital.

“Birthing in the same room, really made it feel more like home,” Zakoor said.

“It’s a really nice facility, especially for our first child. It was pretty nice having all the brand new stuff and all the nurses making us feel very comfortable. It was awesome,” said Guenther.

There are 65 private patient rooms and an Outpatient Clinic in the new Maternal Care Centre, with space to care for 6,000 pregnant women each year. There are also three dedicated maternal operating rooms, which can accommodate twin and triplet deliveries. 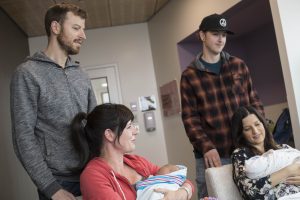 Sept. 29 was also special for another reason, as it marked the last baby born at Royal University Hospital (RUH). Hannah Helen Friesen-Lucky was born on Sunday morning, weighing seven pounds, eight ounces. Her parents, Shannon Lucky and Matt Friesen, arrived at RUH around 5 a.m., an hour before maternal services moved to Jim Pattison Children’s Hospital. Hannah was born shortly after 9 a.m. and about an hour later the family was moved over to the new hospital.