Reason #71: “Because your child’s health is never guaranteed.”

At the age of 10, Kherington has already received over 2,000 needles, multiple surgeries, and visits to Saskatchewan’s Jim Pattison Children’s Hospital (JPCH) every two to four weeks – but she still has not received a formal diagnosis. Kherington, like other children in Saskatchewan, is deemed a “medically complex” case or as her mom Cara calls her, an “enigma.”

Kherington’s medical journey began after having a life threatening event on her way home from daycare. Kherington’s airway began to constrict to the point where she almost couldn’t breathe at all and she became lightheaded and dizzy as a result of her blood pressure dropping. This moment is one that her mom Cara will never forget.

“I don’t think there’s actually words to describe what it’s like to watch your child have a life-threatening event. You look at this tiny human that you are in charge of that you are supposed to be taking care of and keeping safe and healthy that’s spiraling out of control in front of you. You don’t know how to stop it and you don’t know how to fix it. To look at your kid and go, ‘Is today the day you’re going to die?’ is incredibly scary,” described Cara.

At the worst point, if their family is not on top of the medication and treatments for Kherington, one of these life-threatening events can lead quickly to Kherington’s organs shutting down. 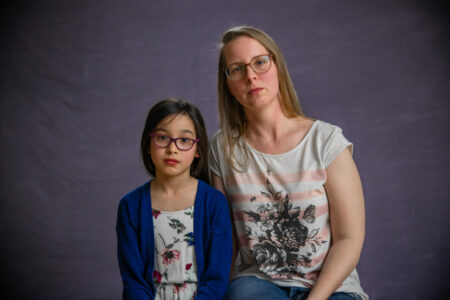 When asked about how she feels when thinking of herself as a medically complex child, Kherington said, “It’s like, ‘Why me? Why did it have to be me who has to go through this?’”

“The doctors and nurses have become my family,” said Kherington.

Without Jim Pattison Children’s Hospital in Saskatchewan, Cara and Kherington know that the life Kherington has been able to live might not have been a reality.

What is your reason to give? Support kids like Kherington when you donate today.

Reason #389: “It was hard to find glimmers of hope when you’re against that type...
Read