Indigenous birth support workers now have funding for meaningful resources to use as part of a traditional birth plan, thanks to donors of Jim Pattison Children’s Hospital Foundation’s recent Making Spirits Bright holiday giving campaign. An incredible total of $160,064 was raised thanks to these generous hearts and a $50,000 match from Conexus Credit Union.

This kind of generosity allows for Indigenous birth support workers to purchase resources to supply new moms with traditional cultural items such as moss bags and belly button pouches. The funding will cover the cost of materials such as fabric, ribbon, leather, beads, thread, needles, thimbles, a leather punch and activity books for long-stay prenatal patients.

The Mosaic Maternal Care Centre on the third floor of Jim Pattison Children’s Hospital offers First Nations, Metis and Inuit women the support of an Indigenous birth support worker. They are non-medical personnel who help patients and their families through the childbirth experience and provide important cultural support and resources.

Angela Tomkins is one of six Indigenous birth support workers at Jim Pattison Children’s Hospital who helps connect new moms to their culture. Tomkins and her colleagues know the history of Indigenous people and their birth practices, as they help mothers participate in traditional birth teachings and ceremonies in hospital. Tomkins said she also helps connect patients to resources, advocates for them and ultimately tries “to be a friend, like an extension of their family.”

Tomkins, who is from Poundmaker Cree Nation, is a mother to two daughters. She said her favourite part of her career is the traditional cultural aspect and being able to teach women the very traditions she practiced with her own children. Her family has passed down important cultural traditions, including a moss bag that Tomkins was in as a child and was then passed down to her daughter.

With the new funding for resources, Tomkins and the other birth support workers can now supply new moms with items such as moss bags, which is a great teaching tool for a baby, as it wraps right around the child to mimic the mother’s womb. Moss bags traditionally held an absorbent sphagnum moss, which helped keep the baby dry and free of diaper rash. One side of the moss bag represents the mother and the other represents the father. There’s a string that laces both sides together, which resembles DNA and symbolizes the umbilical cord, which is also sacred to Indigenous culture.

“It’s so powerful, this umbilical cord. We’re starting with something so small like that. It might not mean anything to some people, but for somebody that wants to learn, it brings you back to being proud of who you are and our ways,” Tomkins said.

“Indigenous people would put it in an ant hill and that meant hard work and community. If you put it in a woodpile that meant the person would make sure the house was warm and cozy and they would work hard to make sure that was possible. You could put it in the mountains, a clean area in the bush, or near the water,” Tomkins explained. 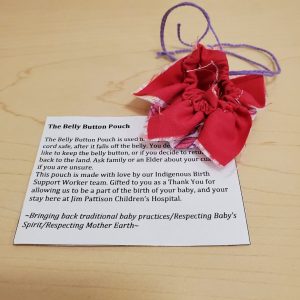 Mothers may also choose to keep their placenta, as some cultural practices say to bury it or place it in a tree. Tomkins said this is symbolic as it is an offering back to mother earth to show respect and gratitude.

Smudging is also an important birth practice that helps bring comfort to patients. The birth support workers sustainably pick their own sage for this. Jim Pattison Children’s Hospital features a Spiritual Reflection Room on the main floor for multi-faith worship, including added ventilation for rituals such as smudging and pipe ceremonies.

“For these babies, it’s their first time in this world, so it’s important to surround them with their culture,” Tomkins said. “We believe the child came from the spirit world, so they are very pure and powerful. They’re lent to us from the creator. When it comes to parenting, that’s one of the main things an elder will always stress to you is that your child is lent to you from the creator and don’t ever disrespect them, treat them good and look after them.”

There were 5,466 babies born at the Mosaic Maternal Care Centre in one year from October 2019 to September 2020. According to Statistics Canada’s latest census, 16.3 per cent of the Saskatchewan population identified as Indigenous.

“Our foundation is proud to support the Indigenous birth support worker program, as it connects Saskatchewan families to maternal care that is inclusive of their culture and traditions. Ultimately, we hope these important resources help women and their families find comfort and peace as they welcome a child into the world and continue to pass their culture down from generation to generation. We’re truly thankful to our generous donors for their commitment to supporting this remarkable program,” said Brynn Boback-Lane, President and CEO of Jim Pattison Children’s Hospital Foundation.

You can make a difference by designating a donation to maternal care at Jim Pattison Children’s Hospital Foundation.